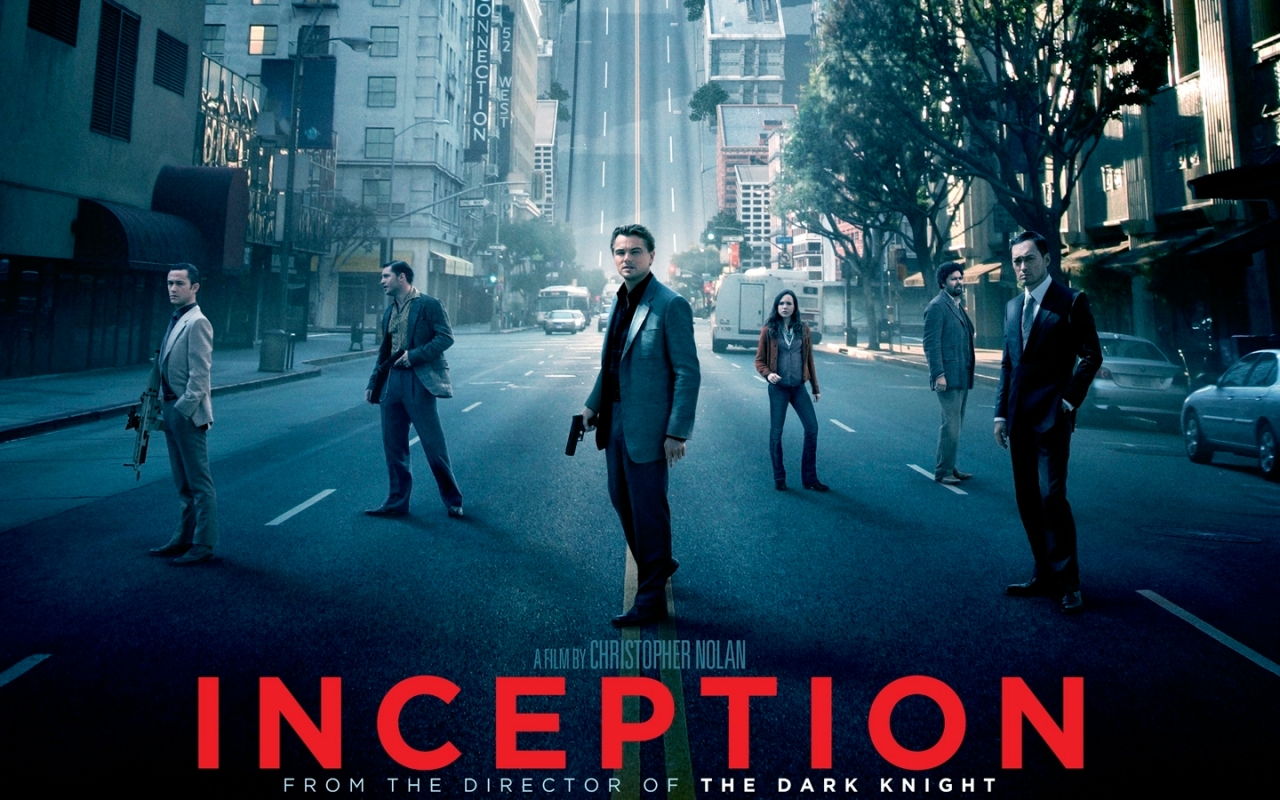 I have a confession to make. I think I have sub ‘consciously’ developed a ‘tendency’ to look at art through an Advaita magnifying glass and am constantly searching for concepts from this philosophy in the art work at hand. Suffering from an Advaita ‘Adhyasa’, so to speak. However I guess it is okay, as long as I make you ‘aware’ about it and you read my ‘posts’ linking art with Advaita with a pinch of salt ( or ‘kataka’) and indulge in these links however strained or tenuous they may ‘appear’ to be.

I just finished watching (or keenly observing) Inception for the second time.

For an Advaitin, watching a movie about dreams, it is like a dream come true . I mean one had to wait for ten long years since ‘The Matrix’ was released for an equally intelligent movie that makes you sit up from your liquid filled pod and think about ‘Reality’.

Since there are enough reviews out there, I will only deal with one concept from the movie, the ‘Kick’.

A ‘Kick’ is the method by which the extractors entering a dream plan their exit from it. Pre timed music is designed to remind the dreamer of an action they have to perform to wake them from the dream and return them to reality.Depending on the level of the dream it could either be by killing yourself or by upsetting the equilibrium of a dreamer. If you’re dreaming a dream within a dream, each level of the dream has to have its own ‘Kick’ in order for the one on the higher level to work.

Like I said, the movie is a very intriguing watch and one does get a kick out of the sheer ingenuity of the story unfolding on the screen.

Whilst I slept over the movie wanting to brush up my Mandukya upanishad soon, I was constantly thinking about the ‘Kick’ and was wondering where I read a similar concept before. What is that one thing (or concept) that kicks you from one level to the other?

I finally remembered the concept of “Swapna Simha Vath” from Swami Parthsarathy’s seminal work “ The Vedanta Treatise”. The relevant para is extracted below:

“Vedanta admits that its philosophy is a part of the illusory world. A portion of this long dream. But vedantic philosophy has one distinction which all other parts of the illusion lack. Its character, its excellence is unique. And that is summarised in one potent Sanskrit phase “swapna simha vath”. Swapna means dream, simha means lion and vath means like. The philosophy of vedanta is said to be like a dream lion. Imagine a lion appears in a dream. The lion in the dream is a part of the dream world experienced by the dreamer. But the lion in the dream has one pecularity. One distinctive character which none of the other objects of the dream possess. And that is its capacity to catapult the dreamer from the dreaming state of consciosness to the waking state of consciousness. When the lion appears in the dream the dreamer experiences a kind of nightmare. He is startled. His horrified. The lion wakes him up as it were. The dream lion no doubt is a part of the dream but it swallows up the entire dream. In doing so the dream lion also vanishes. That is the charecterstic of this dream lion. Similarly Vedanta plays the role dream lion in this world. Vedantic knowledge is part of this illusory world. But then it dissolves the entire illusion of this world. Reveals reality. It inveils your inner Self. It transports you from the plane of world – consciousness to a plane of god – consciousness. That is the beauty of this knowledge. Pursue it till the end. You will reach the ultimate Reality.”

Even though it is said that there is no ‘event’ or “experience” one should look for to know whether one has reached ‘enlightenment’ or ‘self realisation’ I guess there does come a point when the ‘Kick’ (from the study of Advaita) that leads you not from a ‘dream’ to a ‘waking’ state but from the ‘waking state’ to ‘reality’.

Pardon me, but i do get a kick out of making these links !