While everyone talks about Ganga – Yamuni tehzeeb, one hardly finds a similar narrative about Krishna- Musi tehzeeb in Hyderabad of the post independence era.

Even though I did not grow up in Hyderabad, my early visits during the school holidays and since the early nineties when i moved to Hyderabad till now, I find the culture of the progressive and liberal muslims of Banjara Hills to be unique and having a flavour of its own.

There is a certain aura of aristocracy and culture of the landed, that immediately evokes mood and memory of a bygone era. Plays, music concerts, evenings at the Nizam and Secunderabad club have a certain charm that can only be felt and enjoyed by a true Hyderabadi.

But the real reason for this blog is my walk in the K.B.R. park this morning. This park opened for public sometime in the mid 90s and I have been a walking there on and off since then. The park is actually the palace of the Nizam and also houses a mosque which is actively used. Around five years ago, somebody installed a Ganapati murti bang in the entrance of the park for the walkers to pray either before or after their walk. 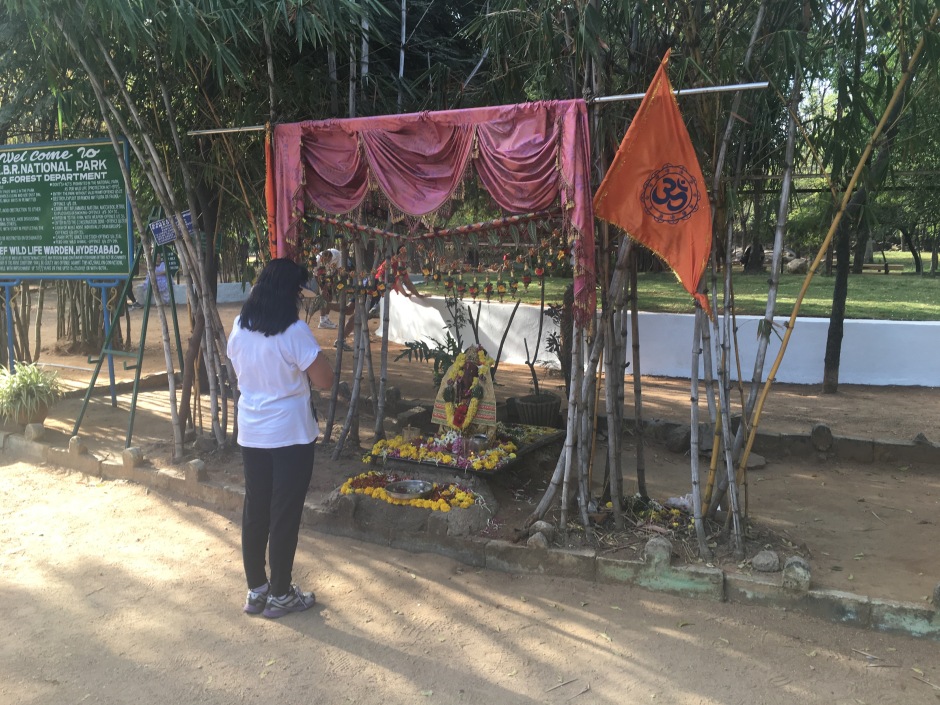 It has now acquired a bit of shelter and a poojari must be coming regularly to conduct the rituals.

Most of my friends now invariable stop and say a short prayer and this morning it struck me that this is a good example of a Krishna – Musi tehzeeb.

Since the mosque is only a few hundred yards away and is part of the palace, some body must have given a permission to install the murti at the gate. Should we not salute this ? Yes it is a government park now, but given the senstivities involved, some body surely had a large heart  that needs to be celebrated if not saluted?

Everyday we are bombarded with some negative news (largely false and twisted) showcasing a fault line between the communities whereas our day to day experience is mostly  one of harmony. Yes there are divisive elements but I believe the onus is on us to dig out each and every case of harmony and highlight it lest we go down a negative spiral unleashed by the media. We need to celebrate every example of togetherness just so that the narrative being set the media is countered by us in our own small way.