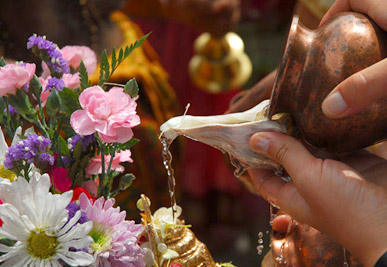 Its festive season and houseful of children are playing Charades using movie titles. Children of various ages ranging from seven years to 17 years, using different techniques to communicate the language of the movie, breaking the words into parts, changing the language of the movie to a different one to signal its meaning and finally a whoop of joy when the title was accurately guessed by their team members.

Sitting and observing this from a corner, my minded wandered into a reverie imagining scholars sitting across each other and playing a version of Vedantic charades!

Vedic scholars have developed a unique culture of condensing the scriptural texts into sutras or terse sentences which are concise but packed with so much meaning that they can in turn be expanded into a bhasyam or a commentary running into thousands of verses. Similarly, mudras (hand gestures) seek to communicate philosophical concepts from the scriptures.

While it lasted, it was interesting experience imagining such a competition between scholars enacting “Athato Brahmajijnasa’ or “Brahma satyam, jagat mithya, jivo bhramaiva naparah”.

Next day, during the morning walk at KBR park, I was listening to Swami Paramarthananda’s talk on “Discovering divinity through Yoga”. Whilst he teaches the prakarna grantha’s during the week, on special occasions like the New year, Shiva Ratri, Guru Purnima etc. he gives a lecture on a general topic culling out the essence from the scriptures but presented in a contemporary way. Here is the relevant extract from this talk that I was listening to, with a bit of editing from my side.

Quote “So our entire Sadhana to bring out the divinity is not acquiring things but removing the extra covering. Just like a sculptor uses three kinds of chisels to make a statue, similarly, the scriptures point out that we too have to remove three layers of obstructions. And as we remove each layer of obstruction by appropriate Sadhana, the divinity in us becomes more and more evident.

Our divinity is covered by three layers of obstacles. The grossest one is called “Malam”, the next subtler one is called “Vikshepa” and the finest covering is called “Avarana”. We have to use three different chisels to remove each one of these obstacles.

When I go through these three stages of Sadhanas, I have removed all the three levels of impurity. Then I, the ordinary human being has become I, the divine one

So what is Karma Yoga? What is Samadhi Yoga? And what is Jnana Yoga?

Karma Yoga is the first stage of Sadhana. Karma Yoga can be defined as proper action plus proper attitude. Now the next question is what do you mean by proper action? The scriptures divide our actions into three types one is called a “Saatvika Karma”, next is called “Raajas Karma” and next is called “Taamasa Karma”. “Saatvik” action is that in which more number of people are beneficiares. When I do a “Saatvika Karma”, not only I get the benefit, but more number of people will benefit in the society. The greater the number of beneficiaries, the more “Saatvik” the action is. Whereas “Raajasa Karma” means an action in which the number of beneficiaries are lesser, mostly the person & his family benefit. Therefore a Karma in which only very few people are beneficiaries,  is called “Rajasik” action or you can call it selfish action. Whereas “Taamsik Karma” is that Karma in which I may get the benefit but in the process, I also harm others. Like any corrupt action, or the sale of adulterated things  which I profit but the society suffers, others are harmed. Therefore, harmful action is “Taamasik Karma”. Selfish action is “Raajasik Karma”, that which is beneficial to all is “Saatvik Karma”.

The next thing is proper attitude. What do you mean by proper attitude? Attitude in Sanskrit is called “Bhavana”. Attitude towards what? Attitude towards both the action as well as the result of action. Because as we do action, not only we are actors doing the action, every action is going to produce a result also. If I start an industry it may succeed. I may get great profit or it may utterly fail also. Or it may not be as successful as expected. So we have to face these two things constantly “Karma, Karmaphala”. What is proper attitude towards “Karma and Karmaphala”? Our scriptures point out whatever Karma, you do, do it wholeheartedly. Never do any action half-heartedly. Even the smallest action of cleaning your plate after eating, let that also be done wholeheartedly. So from the smallest action, ordinary action, to the biggest activity that you undertake,  do it wholeheartedly thereby converting it as an offering to the Lord. And when you are offering your action to the Lord then certainly you will do the action properly because what you have to offer should be a good thing. When you want to offer a fruit to the Lord, you don’t take any fruit, but you make sure that the fruit is a good one. Therefore, if I convert every action into a offering to the Lord, then my sincerity will be involved, my commitment will be involved. This “Bhavana”, this attitude of sincerity and commitment, is important. And not only should I have the attitude of offering it to “Iswara” towards every action, when the result comes, all the results I should accept as “Iswara’s” gift. Whether it is a favourable result or an unfavourable result, whatever “Bhagavan” gives is just result. When human beings give a result in a court one may doubt as to whether the judge has received some money, because you see corruption everywhere. Whereas, when “Bhagavan” gives the result of an action, he does what is just & proper.  As they say “I get not what I desire, but I get what I deserve”. Bhagavan can never be unjust and therefore I cannot blame anyone. I am reaping the result of my action. Therefore, what should be the “Bhavana”? ” Iswara’s” gift.

In Sanskrit, these two “Bhavanas” are called “Iswararpana Bhavana” and “Prasada Bhavana”. So these two “Bhavanas” put together is called Yoga. So Karma means “Saatvikam Karma”, Yoga means “Iswararpana Prasada Bhavana”. Therefore, Karma Yoga means do proper action and also entertain proper attitude towards the action and result. So this is the first stage of Sadhana called Karma Yoga Sadhana. And by following this Karma Yoga Sadhana, what benefit we will be getting? As I said the benefit is the removal of the grossest layer of impurity known as “Malam”.”  End Quote

As I was nearing the end of the walk my mind went back to the game of Charades and suddenly I was struck with two gestures that I would use to explain Karma Yoga if I was playing a game of Vedantic Charades. 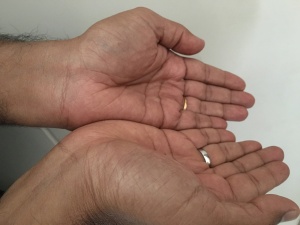 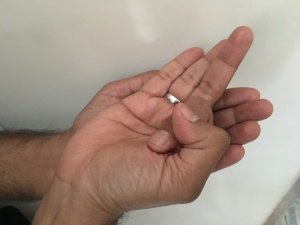 One that offers (arpitam) all your actions of the day to “Ishvara” as you set about your day, and one accepting whatever has happened during the day as a gift (prasada) from “Ishvara” before you retire to sleep.

And from the game of Charades, and these two gestures, I increased my ability to stay in the understanding of Karma Yoga.